The Light of Life

Started by Robert Hall · 0 Replies
Reply to this topic 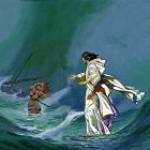 We must be in the light (“the light” i.e. anything that reveals truth - Eph 5:13) in order to walk in it. The light is the full revelation of the Father; the truth as now unfolded in the Son, and Christians are before the Father according to what He is. To be in the light is to be in the position now occupied by believers, “hid with Christ in God” (Col 3:3).

God is Light; such is His nature. Believers are in that light, being before Him according to the measure of His full revelation of Himself through the person and work of His Son. It is not the measure of our knowledge of the Father that constitutes the light. What we may see of the sunlight does not determine what it is. The sunlight of the truth of who and what God is, now shines “in the face of Jesus Christ” (2Co 4:6). The dark night of Judaism, illuminated by types and shadows, “is passed” [see note below—NC]; our privilege is to live and walk in this light.

In this glorious light every believer now is. There is no place before the Father which a believer can occupy in relation to light and darkness save light. Twilight may exist in the souls of Christians who do not fully know the truth of the Gospel (“fully know;” though understanding enough to be saved, yet not enough to understand its complete provisions of growth in Christ’s image—NC). But there is no such existence now as a twilight revelation of the Father (the Son has finally revealed Him—NC).

Being perfectly cleansed by the Blood of the Lord Jesus, the Holiest of All is the believer’s position before the Father (Heb 9:8; Heb 10:19, 22—NC), and it is simply so upon the ground of what the sacrifice of the Savior has effected. It is the believer’s position by virtue of His work. Our dwelling place is in the light and the Holiest of All, not by reason of our subjective condition of soul, but because the Lord Jesus has made the standing ours by the “putting away of our sins” (Heb 9:26), and by bringing us as new creations to the Father. “Having therefore, brethren, boldness to enter into the Holiest by the Blood of Jesus, by a new and living way, which He hath consecrated for us, through the veil, that is to say, His flesh (Heb 10:19, 20).

The first question is, where a man walks; the next, how he walks. Is he in the golden palace where the full blaze of the divine light shines? Actually, he is in, but he may not yet have gone upstairs. A Christian’s walk may often be faulty (ignorantly and unwillingly so—NC), but just because he is in the light he is responsible to walk as a child of the light: “ye were sometimes darkness, but now are ye light in the Lord: walk as children of light” (Eph 5:8). Walking according to the light as God is in the light, none can do, for the standard would be absolute perfection according to the very nature of the Father Himself. The first consideration is where, the second how to walk (in the Light of the Father and the Son; by Their Holy Spirit, who is the Creator of our rebirth – Jn 3:6, 8—NC).

“This then is the message which we have heard of Him, and declare unto you, that God is light, and in Him is no darkness at all” (1 Jo 1:5 – eventually believers will have not have the indwelling darkness of the old man—NC). Our Father knows exactly what we are—He knows every thought, every motive, and nothing is or can be hid from Him. In this assurance the believer walks in the light; he knows the Father is looking into his heart, and sees all things in reality. He does not fear the look of his Father, who is light; nay, he is glad of it. All that he is in himself, his Father knows, and he is aware that he can never take Him by surprise by what he does, because the Father knows what he is, though very often he is a wonder of evil to himself (but not to be “troubled” – Jn 14:1, 27 - because of the Blood—NC). There is not the thinnest gossamer-veil between him and his Father, nor yet a single step which he can take away from the eye of God.

The light of God’s own nature cannot tolerate sin; in the ever-present cleansing of the Blood, the believer is maintained before the holy God. There is a permanent efficacy of this one Cross-shed Blood (He 9:12, 26, 28; 10:10, 12, 14), and ever-abiding value, a constant maintaining power before the Father. We are before Him according to His nature, and in the Blood of His Son we have the everlasting equivalent in relation to our every sin. Such is the intrinsic worth of the Blood of Jesus Christ “our Life” (Col 3:4).
Perfect purity is required before our Father, as we are brought into fellowship with Him, and thus the light and the Blood are connected. The light is our position, and there in that light, the Blood of His Son cleanses us. We do not need to be washed by that Blood again and again, for the Lord Jesus “hath washed us from our sins in His own Blood” (Rev 1:5); but nonetheless we need its ever-cleansing character in the father’s presence, before whom the very heavens are not clean (Job 15:15; 25:5), and who charges His angels with folly (Job 4:18).

We do not need to be brought to our Father again by the Lord Jesus’ work or by Himself, for He “hath once suffered for sins, the just for the unjust, that He might bring us to God” (1Pe 3:18); but being so brought to our Father, being “perfected forever” (He 10:14), we do need (again—NC) that cleansing Blood which ever maintains us where we are positioned according to our Father’s own purity. The very holiness of the Father, the very light itself, is honored by the Blood. We, in ourselves as black as night, are now whiter than snow in the Son. The brighter the light of glory, the more does it manifest what the believer is made in the Son. No trembling of conscience comes in here. The believer has liberty and joy in the nature of his Father.

The Word does not say that the Father and the Son have fellowship with us, as if God walked with us according to our poor mean thoughts or attainment, but He leads us in spirit to His own thoughts of love. Having the divine nature which He has communicated (2Pe 1:4, via Col 3:10), the believer has, by His Spirit’s indwelling, the capability of enjoying common thoughts and affections in fellowship with his Father.
Here it is that the believer walks—“If we walk in the light, as He is in the light” (1Jo 5:7). How he walks is a question to be settled after it is determined where he walks. As walking in the light, fellowship follows, not as an attainment, but as a consequence. Nor is this privilege for a few only; it is the common portion for the Family of God, and is enjoyed by all who are obedient to the light.

The truth of what the light is, is unalterable. It must not be weakened in the soul to suit the sense we may have of our individual practical position. God is God. He is what He is, and ever will be what He is; and His children have fellowship with Him. He leads us up, by His Spirit, to His thoughts (1Co 2:11). He has compassion on us is our feebleness, not fellowship with it. How often our condition hinders practical communion with our Father, but He has brought us to Himself in His sovereign grace, and He changes not. His nature is ever light and love; and this is our absolute portion. Christ-like behavior and fellowship with the Father and the Son in the light in the light, are bright evidences of the existence of the fellowship which belongs by grace to the believer on earth, and which will be his uninterrupted portion throughout eternity.


Note: 1Jo 2:8 – “the darkness is past”: Gill - “or is "passing"; meaning either the darkness of the ceremonial law, which lay in dark types and shadows, and in cloudy sacrifices, and mystical representations of things, and was a shadow of good things to come (Heb 10:1); and its shadows were now fleeing away apace, in fact as well as in right; and so the Alexandrian copy reads, "because the shadow is passing away"; the night of Jewish darkness was far spent, and the Gospel day was not only broke, but it was, or near noonday, which brought the light of faith, and the heat of love with it.

“Or else the darkness of sin and ignorance, of a state of nature, and of the kingdom of Satan, in which the people of God are before conversion; which then passes away gradually, by little and little, for it is not removed at once, or wholly gone; for though the saints are at once removed out of a state of darkness, and from the kingdom of darkness, and the power of it, yet they are not wholly free from the darkness of sin and ignorance, they still see but through a glass darkly; for as yet it is not entirely gone.”


Thank you Father that those whom Your Spirit have born “are not in the flesh,” i.e. not after the old man or sin nature – Rom 8:9—NC.
Share on my timeline

Are you sure that you want to delete this post?

Thread was successfully added to your timeline!